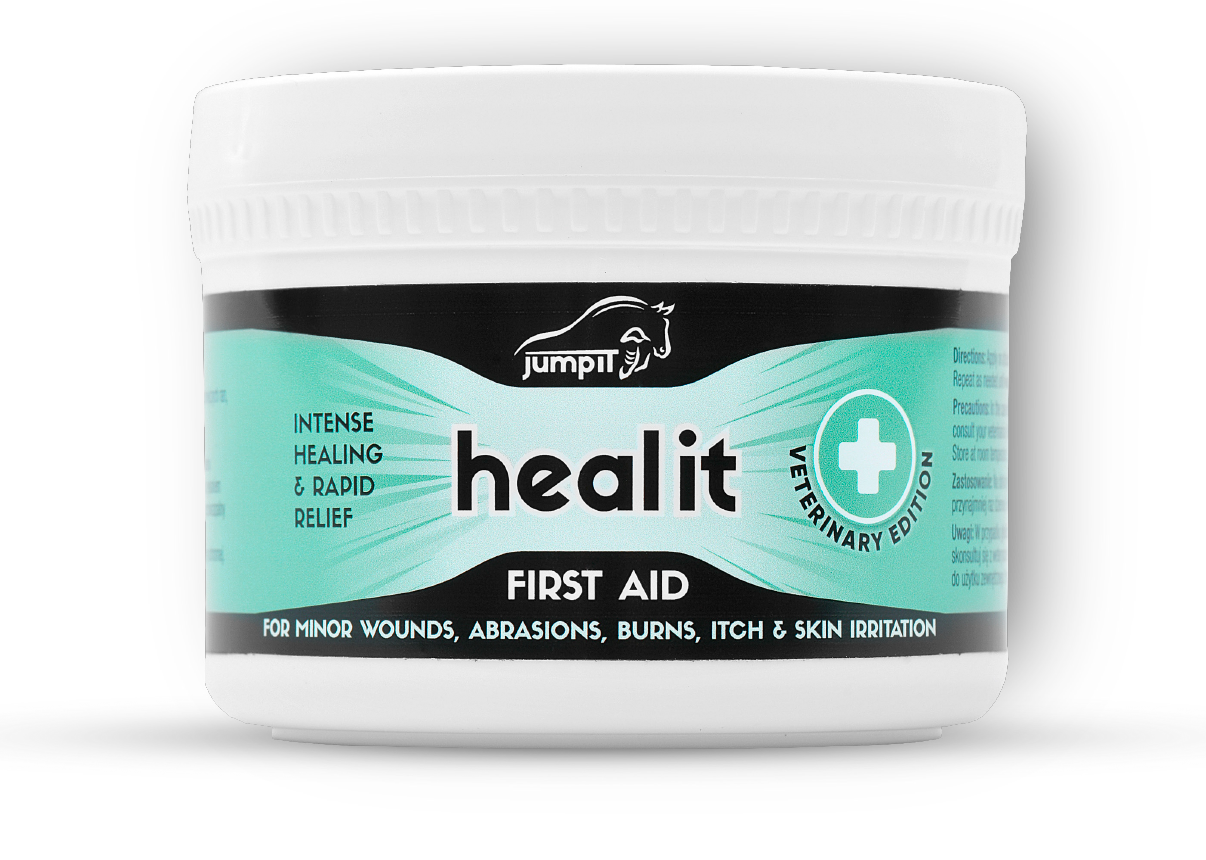 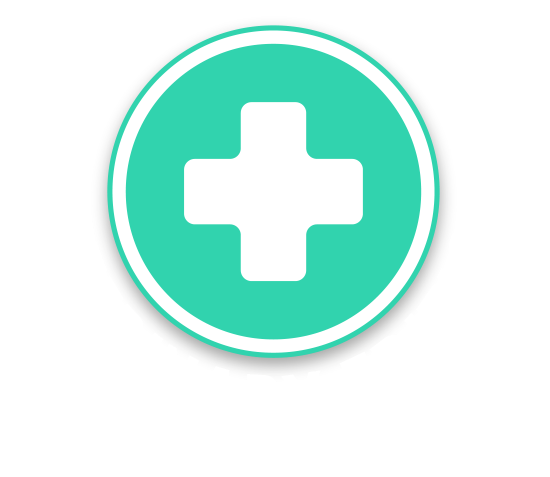 Occlusive healing ointment heal it, designed for special skin care after injuries and wounds. Thanks to the synergistic interaction of many active substances with anti-inflammatory, antiseptic, soothing and protective properties, it accelerates the processes of granulation and healing of small wounds, and strengthens and restores the structure of the skin and hair. 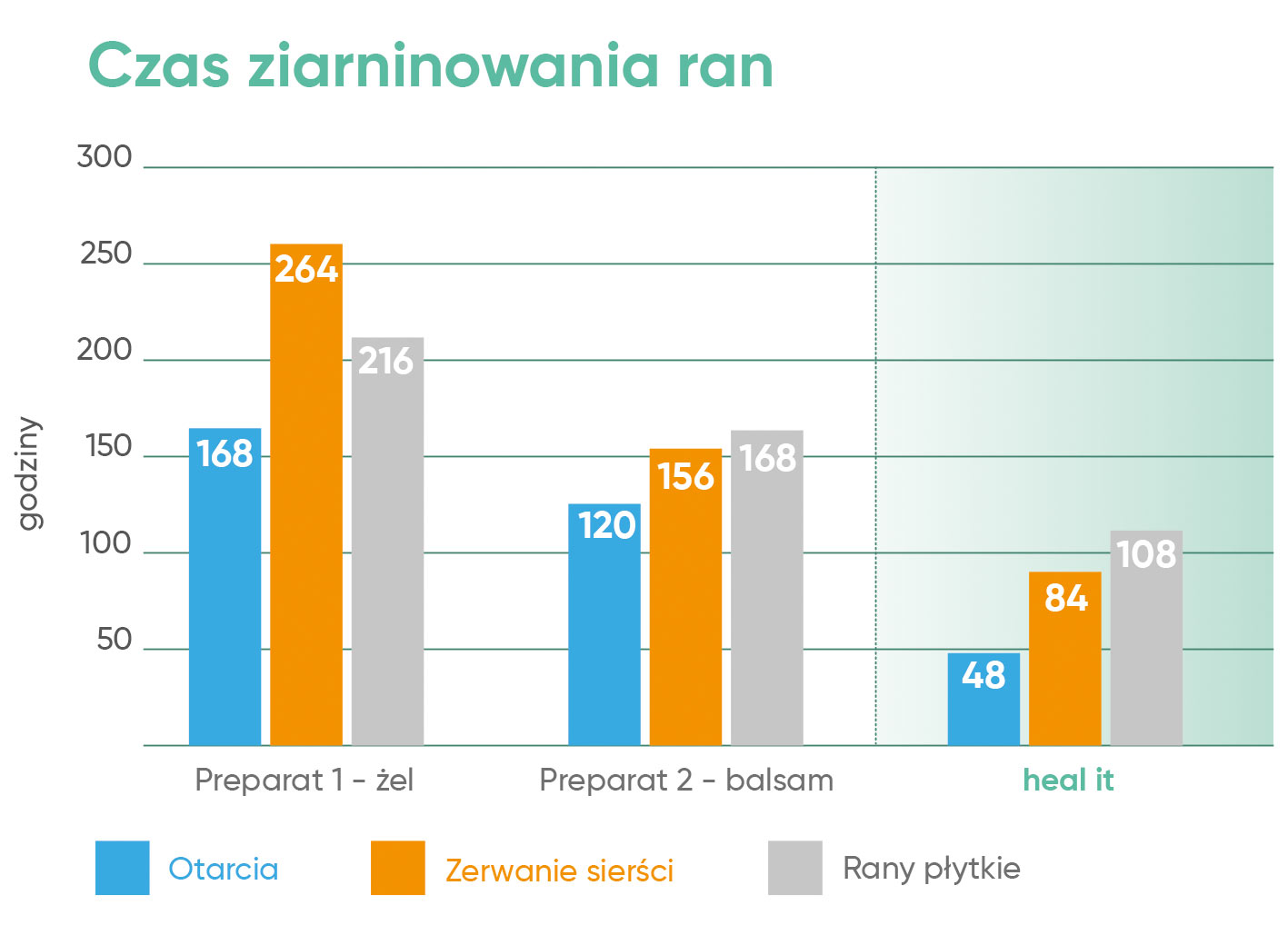 Before being placed on the market, our products are subjected to rigorous scientific tests and strict evaluation by veterinary doctors and users.

Research of market products in relation to the heal it.

The ability of the product to accelerate wound granulation was assessed using the time-lapse imaging method (imaging was performed every 4 hours). Abrasions, abrasions accompanied by hair breakage and shallow wounds were assessed. 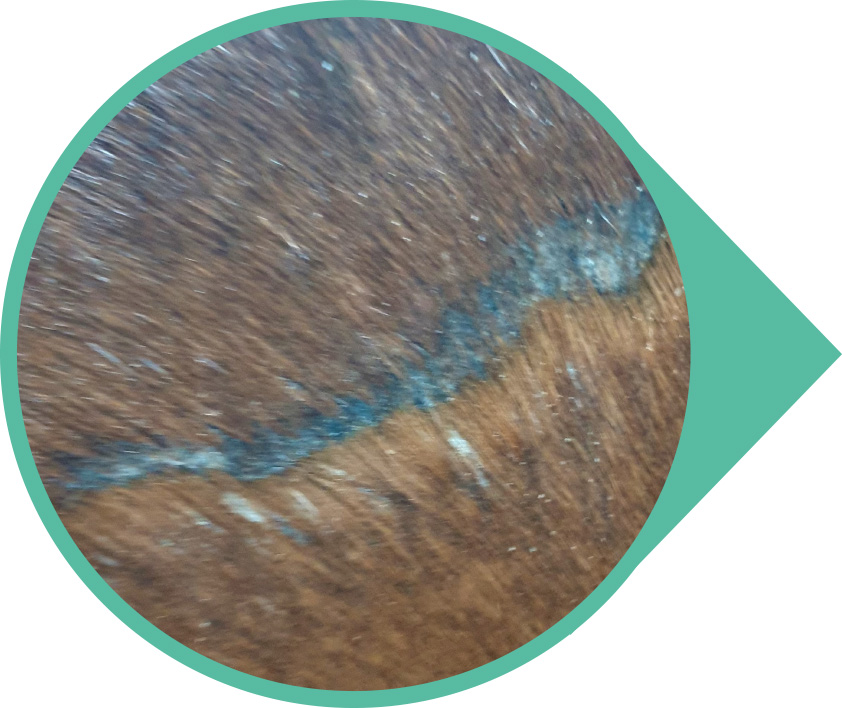 Healed wound after using
heal it 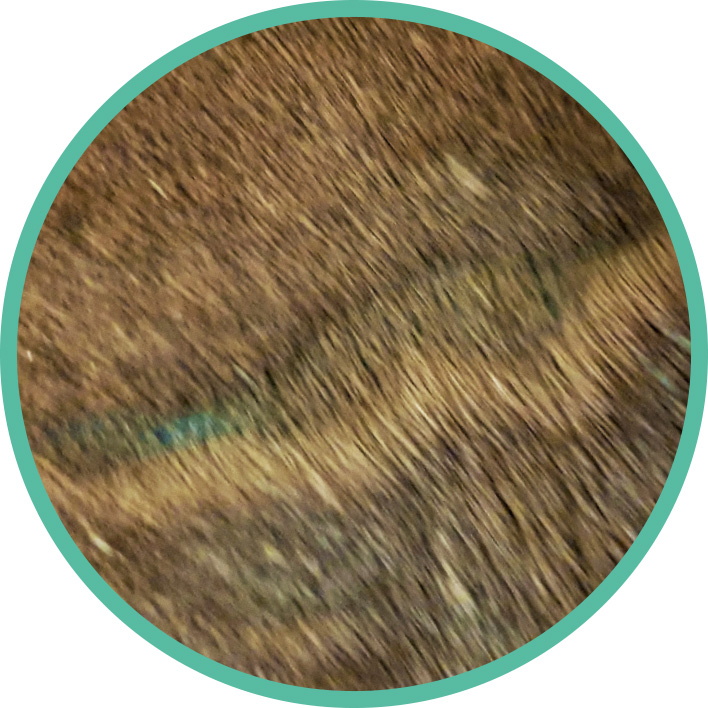 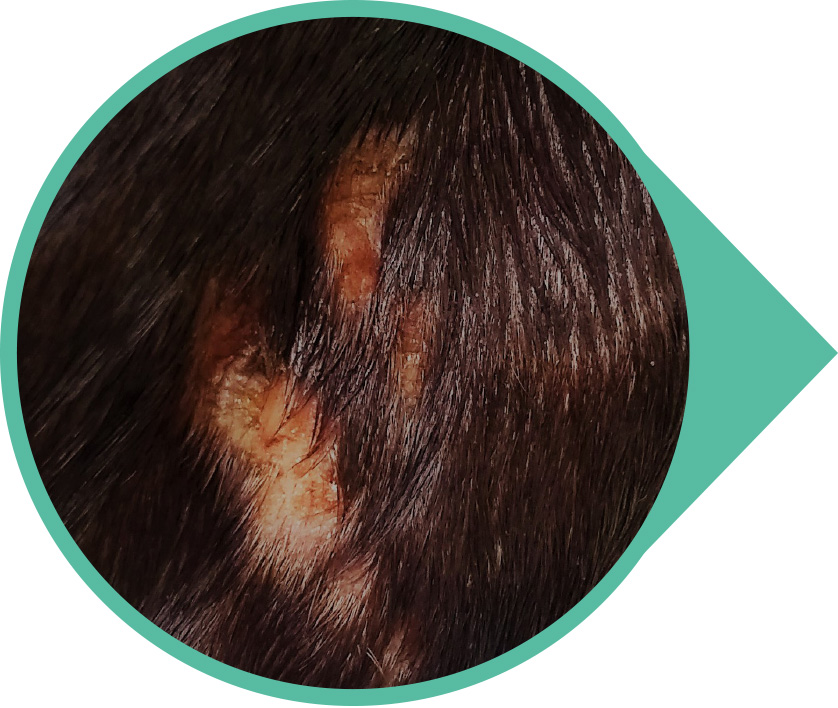 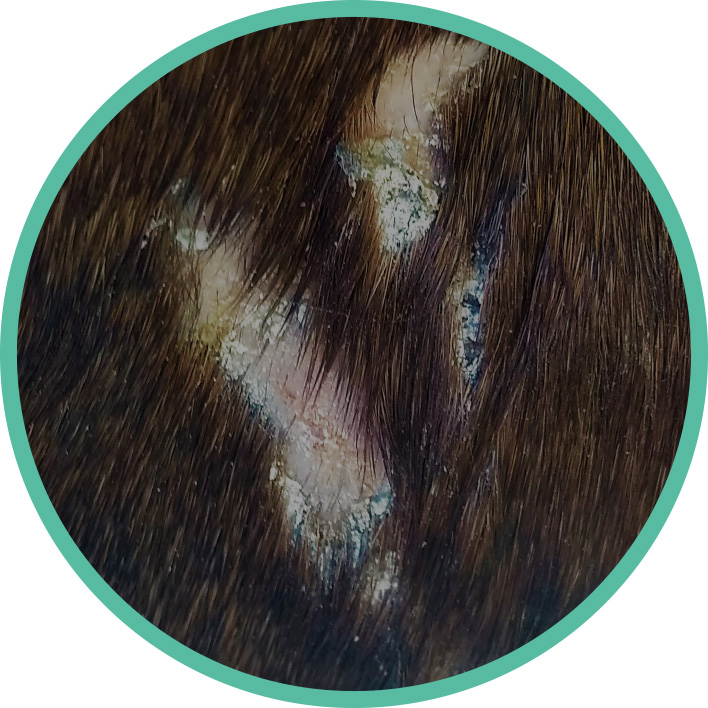 The wound 24 hours after applying
heal it 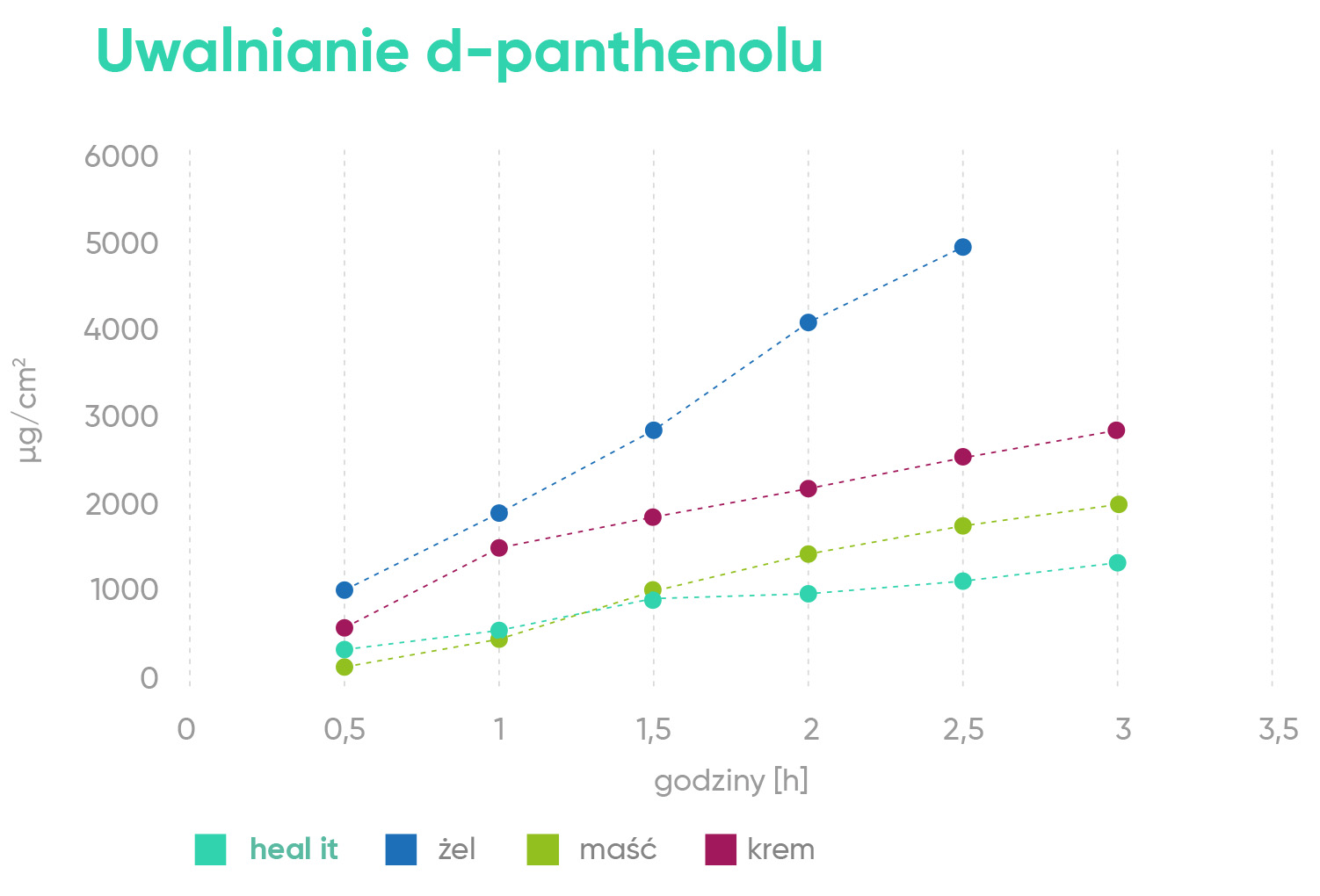 heal it occlusive ointment base was created for the controlled and long-lasting release of active substances on the wound, in order to ensure the maximum effectiveness of the product.

To confirm the effectiveness of the carrier base, a number of tests were performed, including the study of the release from various base forms: gel, cream, ointment and occlusive ointment using so-called extraction chamber. The results clearly confirmed controlled release of active substances from the heal it occlusive ointment compared to other base forms. The active substance is available immediately after use, but its release is gradual and time-based. 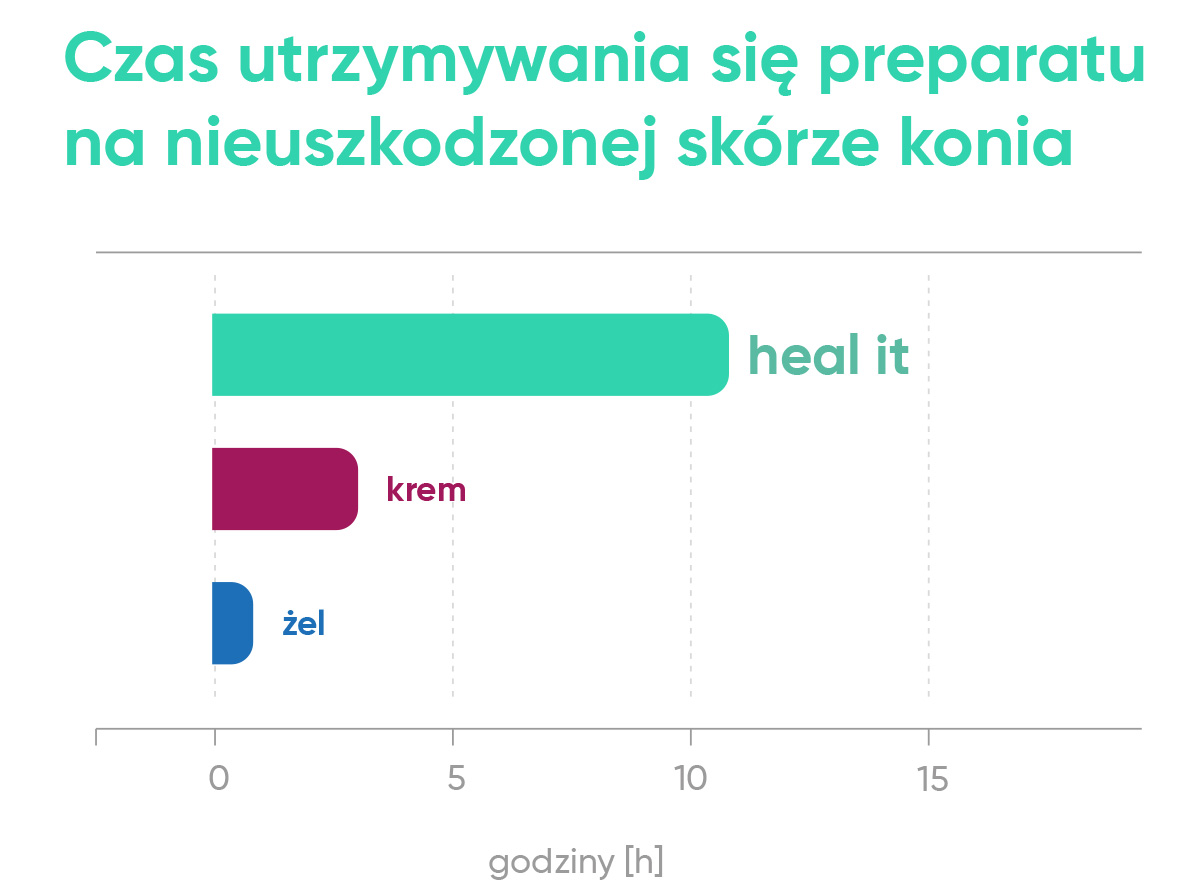 Another study confirming the effectiveness of the occlusive form was test of staying on the surface of the horse's skin. This study confirmed the long-term staying of the ointment at the application place.

The test was carried out by applying the product (5 g) directly to the coat around the wrist of the left leg. Application place monitoring was performed every 30 minutes.

The combination of synergistic plant extracts brings immediate relief from pain, itching, irritation and skin tension, reducing its redness and burning sensation. In the heal it ointment, we use a unique combination of extracts with a high content of sesquiterpenes and flavonoids with a strong anti-inflammatory effect, inhibiting the production of prostaglandins (inflammatory mediators) by blocking the cyclooxygenase enzyme responsible for prostaglandin synthesis. Additionally, the contained helenalin and dihydrohelenalin inhibit the activation of the FN-kappa-B and NF-AT transcription factors involved in the inflammatory process. 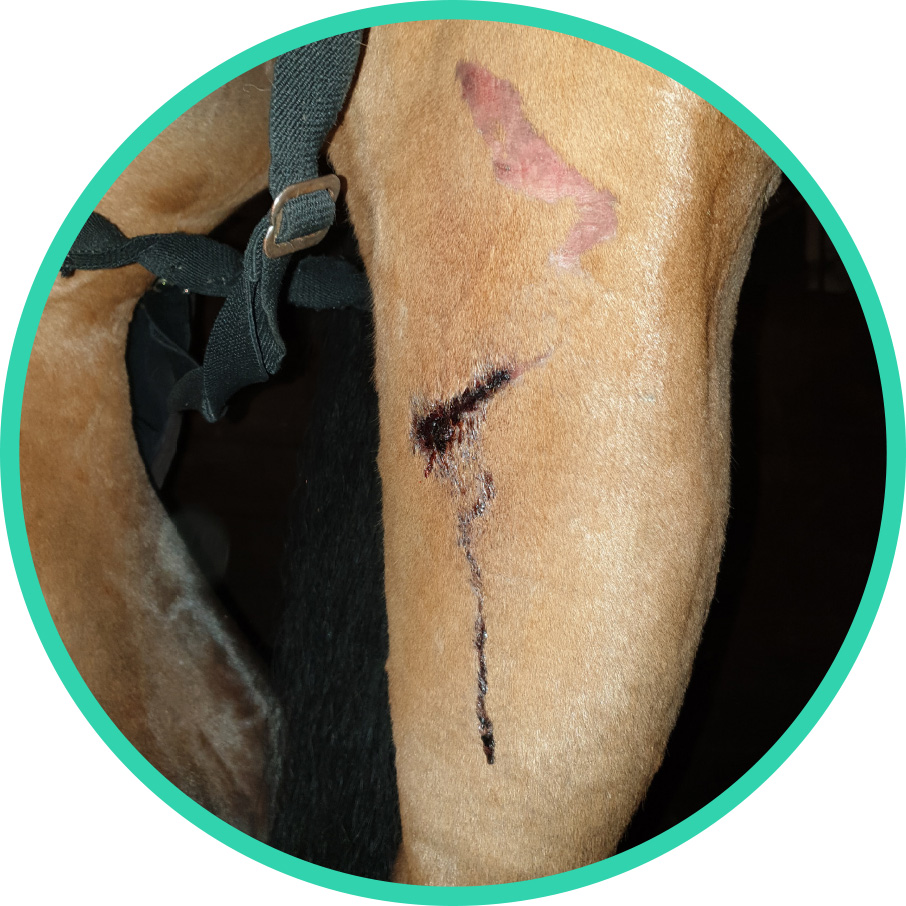 Cutted leg, deep wound was not sutured due to blood clotting. 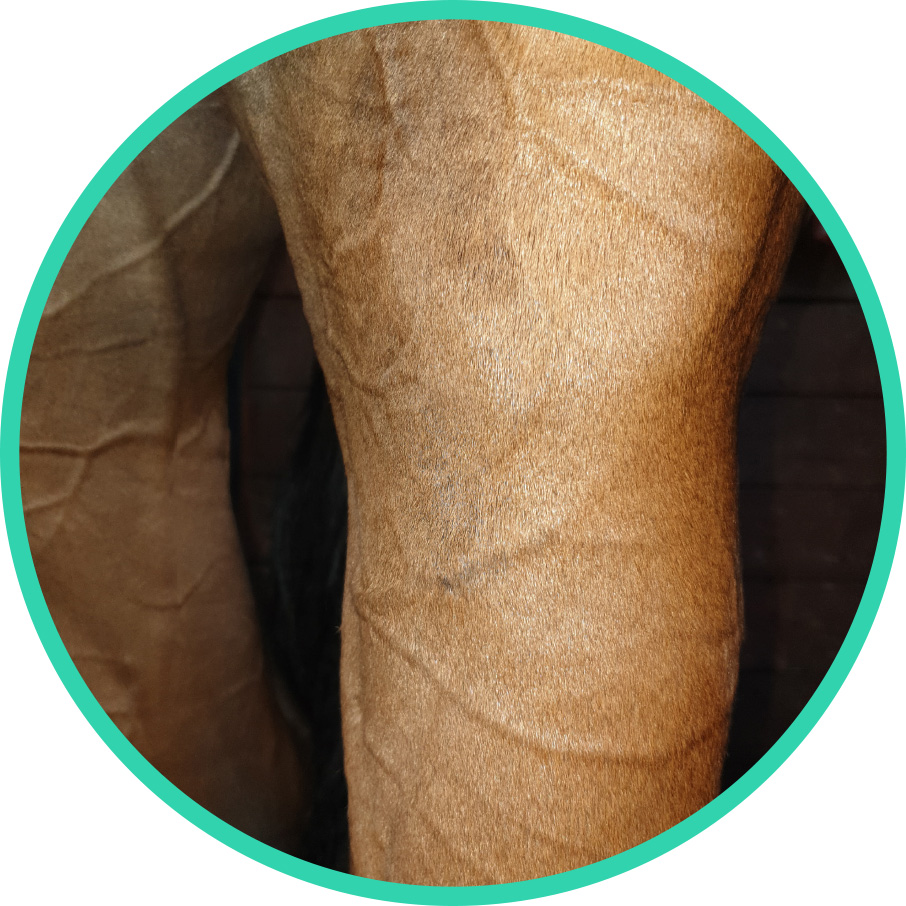 Purified lanolin present in the heal it, according to its composition similar to the skin's lipid layer and its oiling and softening properties in combination with plant essential oils, protects the skin against drying and cracking, makes it more elastic and normalizes the water balance of the epidermis, while rebuilding the damaged protective layer. The proportions of the ingredients are created to ensure the highest possible elasticity of the damaged tissue during regeneration, when the wound is located in the so-called working area (constantly in motion). 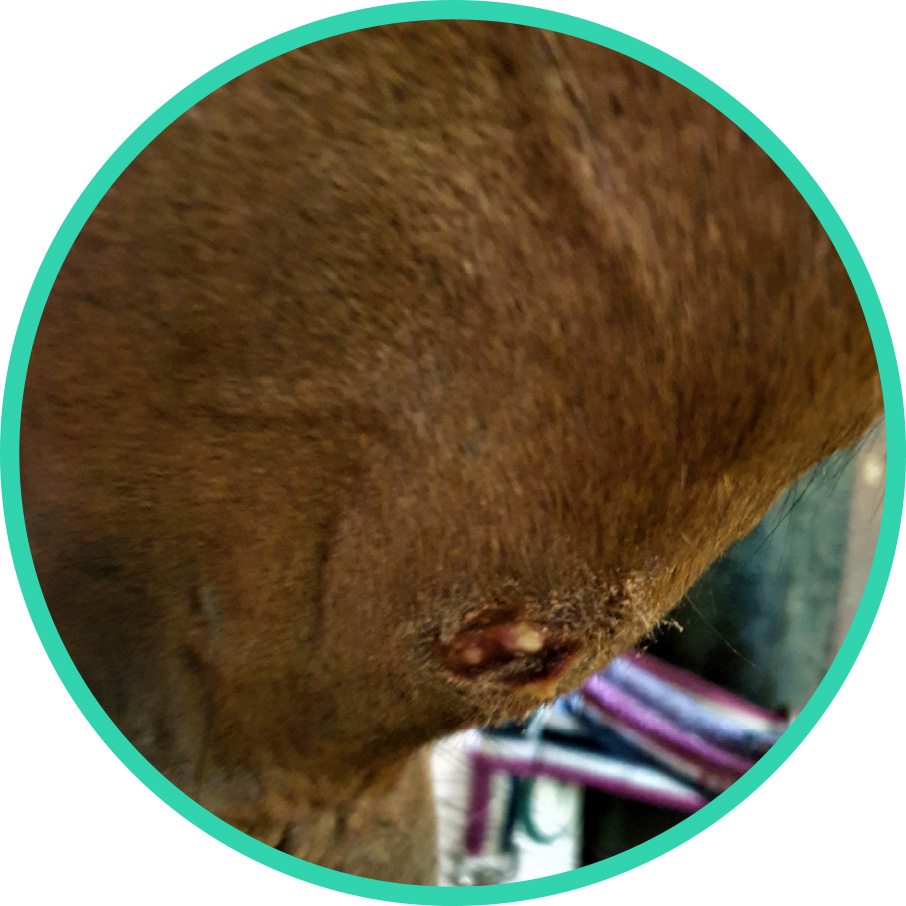 Chafing from a halter buckle 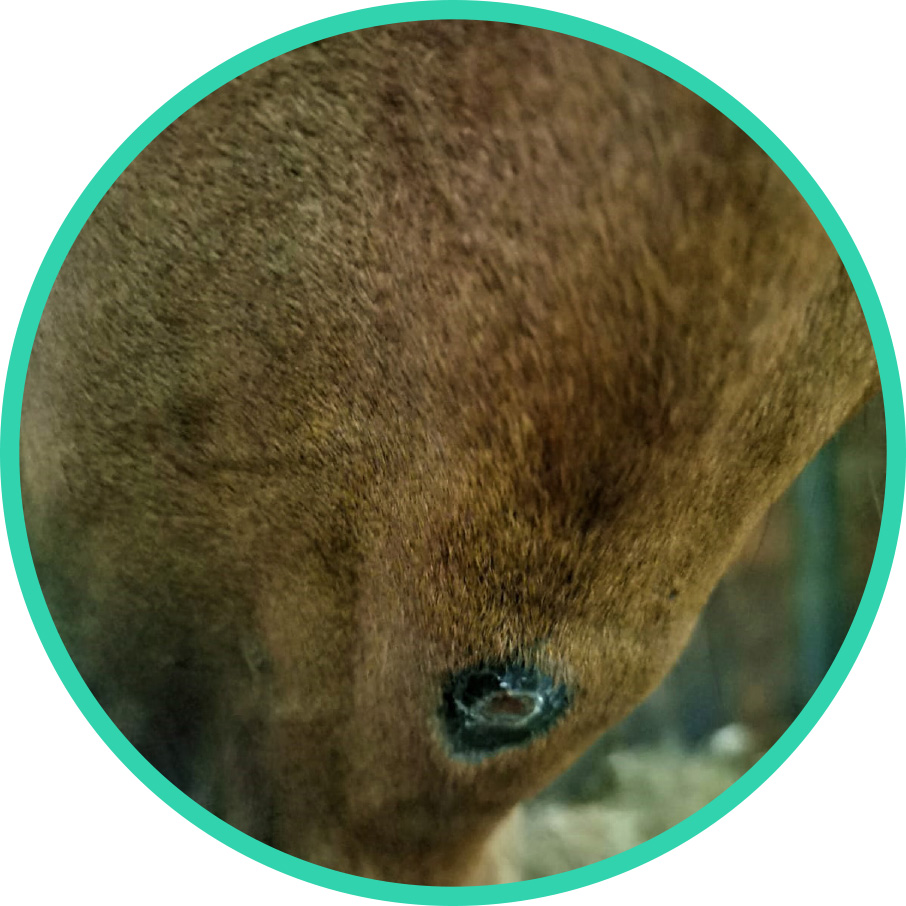 Chafing caused by halter buckle 36 hours after applying heal it

The unique composition of active ingredients in heal it improves the microcirculation of the damaged epidermis, thanks to which the tissues are better oxygenated and nourished. Presence of polysaccharides, flavonoids, triterpenes and carotenes affect the metabolism of glycoproteins, collagen and elastin fibers, which are structural components of the veins. The supplied substances act as factors inducing the formation of micro-vessels, thus contributing to the acceleration of the healing process. It also directly translates into an increase in the natural production of collagen and elastin, which are necessary for the reconstruction of the skin and the proper scarring process. Scars become less visible and imperceptible, and the regeneration time of the epidermis is much shorter. 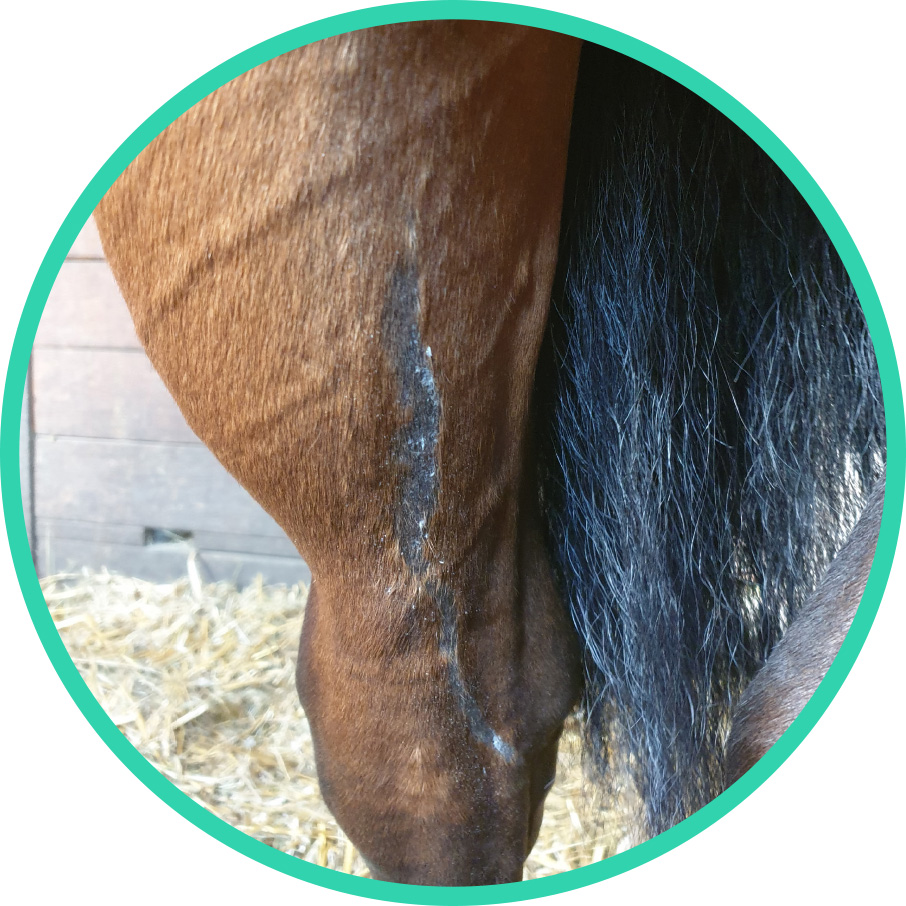 The wound is cared with heal it. 6 days after the epidermis is peeled off while the horse jumps over the paddock rails 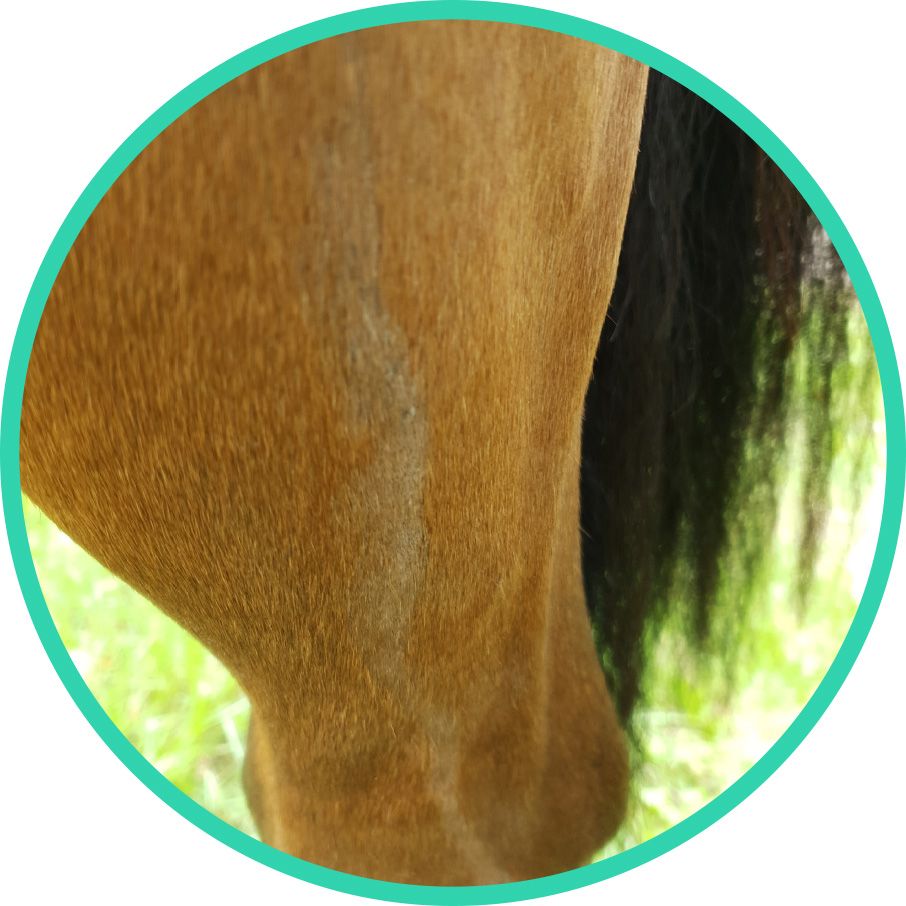 Wound care with heal it - 10 days after skin tearing during a horse jump over the paddock railings - rapid hair growth at the wound place, non-protruding scar

The oils and essential resins used in formula have anti-inflammatory and local pain relieving properties, they have a positive effect on the structure of scars and show strong antiseptic effect. The ointment uses raw materials rich in anthocyanins, tannins and essential oil components with a broad spectrum of antibacterial and antifungal activity (often limiting the development of antibiotic-resistant pathogenic bacteria). They protect damaged skin against infections and harmful external factors, and also stimulate hair growth on the regenerated tissue. 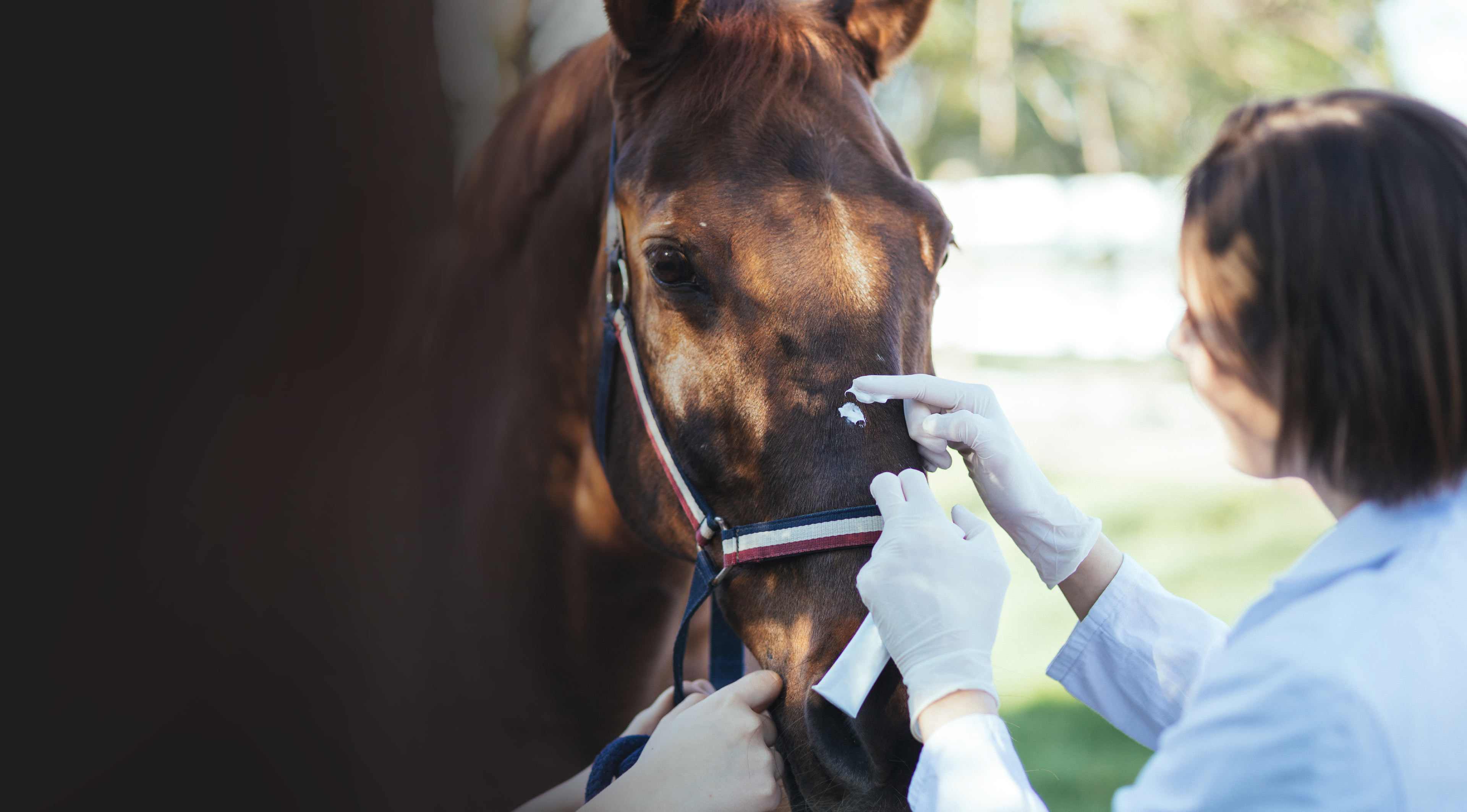